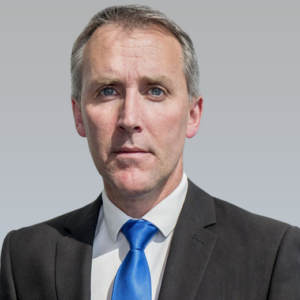 Ciaran Martin was announced as CEO NCSC on 15 March 2016, having previously held the role of GCHQ's Director General for Cyber Security since February 2014. As CEO NCSC, Ciaran leads the public-facing London centre, the UK’s technical authority on cyber security, aiming to make the UK the safest place to live and do business online.
Since he joined GCHQ, Ciaran has led the transformation of GCHQ’s security mission into an active and supportive role for Government departments and critical national infrastructure and has worked to make GCHQ’s technical expertise and advice more widely available.
Until April 2016 he was also the GCHQ Board member responsible for GCHQ’s strategy for managing information risk and has led on policy and communications for the Department.
Prior to his role at GCHQ, Ciaran spent eight years in the Cabinet Office as Constitution Director, Director of Security and Intelligence and Principal Private Secretary to the Cabinet Secretary. Ciaran has also held a variety of policy roles at HM Treasury and spent three years in the National Audit Office.
Ciaran graduated from Hertford College, Oxford in 1996 with a first in history.