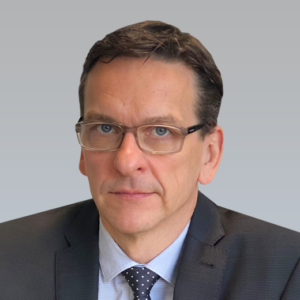 Since 16 of January 2020 Kilian Gross is Head of Unit A/2 in DG CNECT responsible for Technologies and Systems for Digitising Industry. His Unit is responsible for the implementa-tion and development of the Digitising European Industry Strategy including the setting up of a network of Digital Innovation Hubs in the EU. The Unit manages a number of important re-search projects under H2020. It developed the Coordinated Plan on Artificial Intelligence and is currently preparing the proposal for a European Approach to Artificial Intelligence.

Beforehand since November 2015 Kilian Gross was a member of the Cabinet of Commission-er Oettinger. Within the Cabinet, he was mainly responsible for the Commission Anti-Fraud Office (OLAF) and DG HR. When Commissioner Oettinger was responsible for the Digital Economy and Society, Kilian Gross took care of research, the data economy, e-commerce, in-novation and infringements. On the non-portfolio side he dealt inter alia with state aid, energy and climate and trade issues.

From February 2010 until 2015, Kilian Gross was Deputy and Acting Head of Unit of Unit A/1 within DG ENER, which was dealing with energy policy coordination, planning and pro-gramming and legal questions. During his time in DG ENER the Unit has in particular pre-pared the Energy Roadmap 2050 and the Energy Framework for 2030. Beside the policy work, Kilian was namely responsible for the creation and management of a legal team within Unit A/1.

Before joining DG ENER in 2010 Kilian Gross was a member of the Legal Service of the Eu-ropean Commission. He was mainly responsible for tax issues and later for state aid files. In the later function he was involved in all state aid aspects of the Climate Change Package of 2008 namely the Environmental State Aid Guidelines and the Renewable Energy Directive. Kilian Gross was agent on behalf of the Commission in an important number of cases before the European jurisdictions.

Kilian Gross started his professional career as an in house lawyer mainly for competition law issues. He is a German lawyer by training with a strong specialisation in European and interna-tional law.