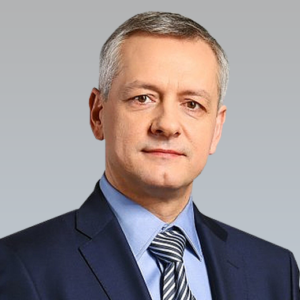 Minister of Digital Affairs of the Republic of Poland

As Minister of Digital Affairs, he is responsible for the state policy in the field of computerisation, development of e-services in public administration, civil security in cyberspace, infrastructure and the use of innovative technologies.

He has been working at the Ministry of Digital Affairs from 16 September 2016, where until 17 April 2018 – the day of appointment to the ministerial position – he served as the Secretary of State.

Member of the Sejm of the Republic of Poland.

He also served as the President of the Board of the European Fund for the Development of Polish Rural Areas Foundation (in 2005-2006 and 2009-2015). Before that, he worked as a manager in private companies.

Marek Zagórski was born on 6 August 1967 in Kamień Pomorski. He graduated from the University of Szczecin and the Warsaw University of Life Sciences.

Under his leadership, the Ministry of Digital Affairs has prepared a number of facilities for citizens, including tolls for reporting the birth of a child on-line, as well as an exemption for drivers, who do not have to carry their vehicles’ registration certificates any more. He coordinated work on the preparation and implementation of the Act on the National Cyber Security System, adaptation of Polish regulations to the General Regulation 2016/679 of the European Parliament and the Council (EU) on the Protection of Personal Data (GDPR), as well as changes in telecommunications law, thanks to which subscribers are better protected against abuse by dishonest Premium SMS service providers. Thanks to the activities undertaken by the Ministry of Digital Affairs during his term of office, in 2018 the number of Trusted Profile users increased by one million (to more than 2.6 million).

As the Minister of Digital Affairs, he also implements a project of key importance for the development of the country, namely the National Educational Network project.